The Parish of Knowstone in North Devon lies midway between the market towns of Tiverton and South Molton, just off the southern borders of Exmoor. In 1086 Knowstone was written as Chenutdestana and in 1220 it became Cnouston, changing variously to become Knowstone in 1489. Knowstone is recorded on the early survey maps of 1795/6 compiled by Captain William Mudge and Isaac Dalby.

There is a copy of the Tithe Map of 1841 in the Parish Hall. The English Civil War affected many a household in the area, and of historical record in this Parish were the Shapcotts of Shapcott Barton. There are a good number and variety of local historical documents stored in the Village Hall, and many local people take a keen interest in the collection and preservation of items and artifacts of historical and contemporary significance. A useful starting point for tracing the Geography and History of Knowstone Parish is the Knowstone Parish Plan link here.

Other useful information concerning Knowstone origins can be found at web sites for Shapcott Barton  www.shapcott-family.com

The Doomesday Records show that:

"Algar holds KNOWSTONE. He himself held it TRE, and it paid geld for 1 virgate of land. There is land for 3 ploughs. There are 2 ploughs, and 2 slaves and 2 villans and 3 bordars and 5 acres of meadow, and 30 acres of pasture and 1 acre of scrubland. It is worth 7 1/2 s." (Domesday Book - A complete translation, Alecto Historical Editions, 1992)

Historic Marker Stone makes way for the A361

In the mid 1980's, an ancient marker stone was relocated to make way for the construction of the A361. What will future archaeologists make of this when all contemporary written records have been long lost? In May 2017 the Beaples Stone was given a makeover.

During World War Two a `flak’ proof building, similar to an `Anderson bomb shelter’ measuring around 12 feet by 8 feet consisting of very thick galvanised sheets with straight sides and a hooped roof about six feet high, bolted together and in turn bolted to a steel girder base was situated at the top of Tracey's Hill (in Ken Dyke's middle field).  It has been dismantled now and the useful nuts and bolts were given to the `Cobbaton Combat Collection’ museum. It is believed to have been where the Home Guard met during the WW2. If you have any further information then please let us know.

HMS Eggesford, one of Britain’s 2nd World War type III Hunt class destroyers, was built in the yard of J. Samuel White at Cowes, Isle of Wight in 1941 and served valiantly on escort duties in the Mediterranean. She survived the war and was eventually sold to the Federal German Navy as a training ship in 1959.

So where’s the link to our Parish? Towns and parishes throughout the country held collections to help towards the of cost building aircraft and ships. Knowstone parishioners were exceptionally generous collecting no less than £2,300 (£90,000 in today’s money) towards the build cost of HMS Eggesford (total build cost in 1941 £352,000).

At a meeting of Knowstone Parish Council on Tuesday 26th November 2019, Mrs. Rosemary Newton, who farms in East Knowstone and has carried out a great deal of research into this important piece of our parish history, presented a framed photograph of HMS Eggesford the Parish together with supporting documents obtained from the Ministry of Defence and other sources.

We are very grateful to Mrs Newton for researching this important and interesting piece of parish history. 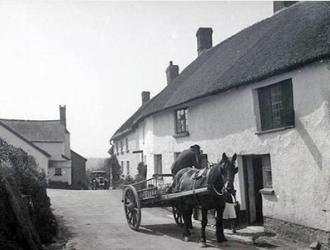 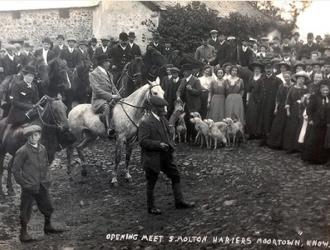 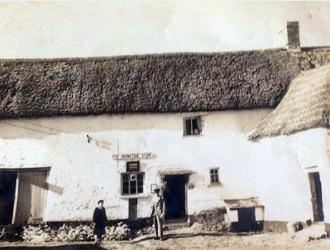