This Standing Stone has been variously known as the “Knowstone”, the “Beaples” stone or just as a “boundary” stone, a “marker” stone and a “rubbing” stone. It is not a Parish boundary stone, as the Parish boundary runs several hundred metres to the south, but it did lie on the Beaples Barton Estate land and was most likely to have been a “rubbing” or “tether” stone for bulls and horses working on the farms in the area.

As a Standing Stone, it could be seen from Exmoor and was mentioned in a book on Ancient Exmoor by Hazel Eardley Wilmott. There was a myth that, on certain moonlit nights, the stone would turn around and the fairies would dance around it, and if it was removed, then all the
fairies would disappear.

When the A361 road was being built, a great deal of ground reshaping took place, and the Stone lost its prominent position and became a hazard to the side of the new road. So, under the direction of Devon County Council Archaeological Group, it was taken up and moved 50 yards to its present position and passed into the care of the Parish Council. It is not known whether the fairies left.

In its new position, it was, as before, bedded on a bowl of fine stone retaining its original alignment and high place, and with easy lines of sight to and from Exmoor. It lies on Ancient track-ways from Exmoor to Dartmoor, a fact that was confirmed by the Wessex Archaeology “dig” in July 2014. This revealed the remains of a medieval building (11th-15th Century), possibly part of a farming community, about 100 metres south of the Stone, together with a large trackway and drainage ditches.The “dig” was a planning “condition”, and the remains were then covered over prior to the building of wind turbines on the land.

In 2018 Councillor Timothy Browse was instrumental in pursuing the idea of placing at bench at Beaples Stone. In 2019 thanks to Timothy's hard work the area was tidied and the bench put in place. 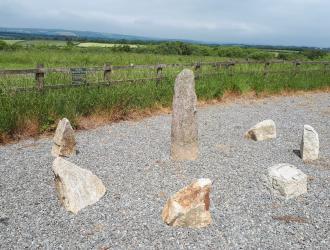 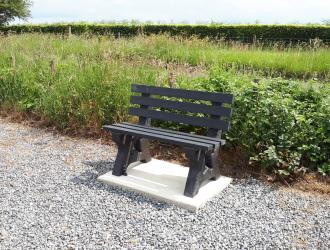